The Washington State Ground Water Association is dedicated to technical and professional leadership in the advancement of the drilling and ground water industry. It is the responsibility of the Association to educate its members and the public on the issue of ground water and its usage.

The Association has three important goals:

By continually educating the public and our members, we can protect the quality of this natural resource.

On February 8, 1947 Clarence Sly, George Sample, Scott Armstrong, Ralph Furness, and Clifford Furness, Trustees, set down their ideas and created the Washington State Well Drillers Association, Inc. On June 20, 1947 Clarence Sly became the first President, and George Sample was elected as Vice-President, S. A. Nordstrom was named Secretary-Treasurer. Articles of Incorporation and By-Laws were filed on December 9, 1948 declaring the Washington State Well Drillers Association, Inc. a non-profit corporation in the state of Washington.

Their vision was to bring the well drilling contractors of the state into a relationship of mutual helpfulness and cooperation; to collect from and disseminate to its members information and ideas promoting their general welfare; to put the well drilling business in the state of Washington on a scientific and efficient business basis. 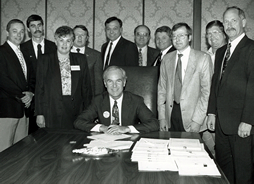 A History of Accomplishments

Through the years the association has been instrumental providing professionalism, knowledge, and guidance; introducing and monitoring legislation for the welfare of the ground water resource and industry; created a liaison with state and local agencies promoting the best interest for public health.

Become a member, meet our officers, or learn more about our legislative activities.